Like any mythical story, Mithras' life is difficult to trace chronologically. There is no writing preserved in which his exploits are described. Even so, the archaeological monuments, especially in the Rhine and Danube provinces, are quite explicit. Following the order proposed by Manfred Clauss, everything had to begin with a symbolic and extraordinary birth from a rock. 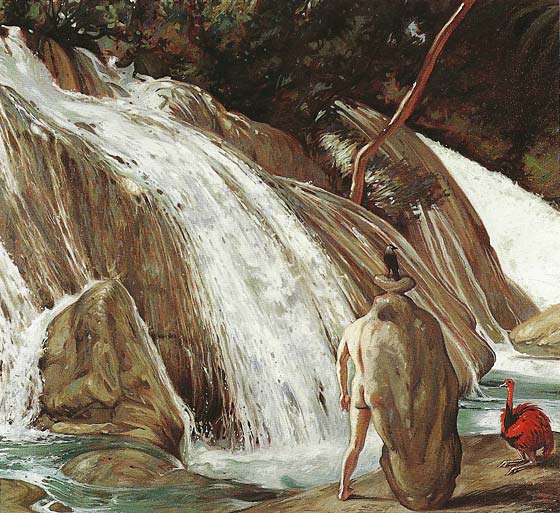 The god born from the rock

Mithras is born naked but already wears the characteristic Phrygian cap. He is fully formed, because he has the ability to provide for himself and to undertake his divine work from birth. As soon as he emerges from the rock, Mithras raises both arms, holding the dagger in one hand and the torch in the other. With the weapon, he will perform the Sacrifice that will release the forces of nature; he is the creator of life. With the torch he will bring light to the earth, for Mithras is genitor luminis.

In the preserved monuments, petrogenesis is the second most represented image, after Sacrifice. This gives us a clue about the significant importance that surrounds the miraculous birth. The rock is petra generatix, a fertile rock, source of life, which we can associate with the philosopher's stone. It represents the Cosmos, as is the cave, the place where the most significant events occur, including birth. It also represents the Earth, as reflected by the serpent, animal associated with this element, which sometimes surrounds the stone, as in the Petrogenesis of the Mitre I of Ptuj.

The birth of the invincible god occurred on December 25, assisted, in some cases, as shown by the Petrogeny of Ptuj's Mitre III, by both Cautes and Cautópates.

The preserved monuments usually depict Mithras sitting on a rock pointing with an arch towards a rocky wall, in front of which there is a kneeling weighing. Another figure may also appear in an attitude of supplication or with one hand on Mithras' back. These two companions, dressed as Mithras himself, are associated with Cautes and Cautopates, who attend the great events of the Creator God. In this sense, we can link one of the graffiti found in the Mitreo of Santa Prisca which reads: "You who have fed the twins with nectar". The miracle of water is one of the most widespread myths of antiquity and reflects the importance of water as an element that generates life. Likewise, water is part of the Mithraic rituals as shown by the proximity of fountains in places of worship, as well as cisterns and craters found inside. In fact, the crater, a utensil associated with fertility, is one of the symbolic elements often found in reliefs.

Mithras captures the Bull with no help other than his own skill and initiative. However, this action does not occur easily, and is usually represented in four phases, as can be seen in the relief of Neuenheim/Heildeberg.

In the first image, we can observe the Bull grazing peacefully and freely. Mithras then captures the bull and, thanks to his mythical strength, manages to carry it on his back. But this does not prevent the animal from escaping. Mithras then decides to ride on it, holding either a horn or directly from the neck with both arms. Porphyry comments in De Antro Nympharum that Mithras "also rides a bull, Taurus being assigned to Venus", and even more than the god, "as creator and lord of Genesis, Mithras is situated in the region of the celestial equator".

Finally, when the bull is completely exhausted, Mithras in turn carries it on his back to take it to the cave where he will make the sacrifice. 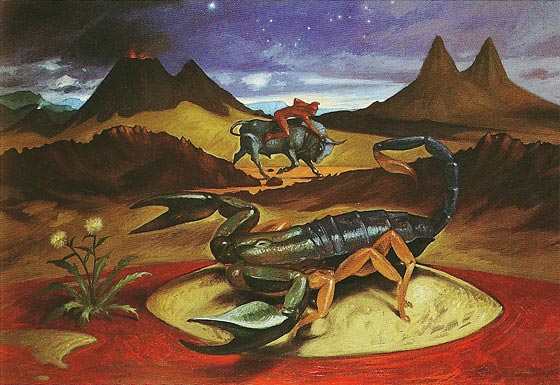 Sacrifice is the central act of Mithraic mythology, and is infallibly found in all temples to the solar god. In the cave, Mithras reduces the animal by pressing on its back with his left knee, while holding the hind legs with his right foot. Next, he immobilizes the head of the animal by inserting the fingers of his left hand in the nostrils, while with his right hand, he nails the dagger in his jugular.

Mithras maintains a serene and determined attitude, which reinforces the idea of the god's psychic superiority. In reality, this sacrifice has little to do with a slaughter or a destructive act, but, on the contrary, with transfiguration and transformation. Indeed, in most of the representations, it is observed how, from the tail of the animal and sometimes also from the wound, wheat spikes arise.

At the very moment of the sacrifice, a scorpion, a snake and a dog approach, attracted by the regenerating energy emanating from the sacrificed Bull. It is, then, the life that is reborn after death; life produced by Mithras, god of light, the Sun, without which nothing is possible.

For the initiates, Mithras is the creator god who revives nature and at the same time generates the cosmos. Creation arises from the sacrifice of the Bull which, as a lunar symbol, expresses death and rebirth, and it is none other than Mithras, the Sun, who executes it.

The obediente of Sol

It is one of the most enigmatic representations of Mithraic ensembles. Sun usually appears kneeling in front of Mithras in attitude of submission. The Persian god seems to want to place, with his right hand, a Phrygian cap on the head of the Sun, while he holds it with his left hand.

We can interpret that, in this way, Sol shows submission to Mithras who in turn pays tribute by granting him the Mithraic attribute par excellence.

The dexiosis, a new pact between Mithras and Sol

On this occasion, Mithras and Sol meet face to face, on an equal footing. Both shake hands (dexiosis), sometimes in front of a flaming altar, which confers a great solemnity to the event.

For Greeks and Romans, this gesture was not as common as it is today, and was only performed on certain occasions. In this case, we can conclude that Mithras and Sol thus seal an agreement that probably precedes the banquet.

The found monuments show Mithras and Sun lying on a bull's skin, symbol of Mithras' victory that announces the success of his followers. Sun, as usual naked, appears in the middle of the composition with Mithras to his left also dressed in his usual clothes. Both usually raise their hands in an attitude of blessing.

In front and on the sides there are other characters dressed according to their grade, while they serve the food to the divine couple. At the banquet currently in the Louvre Museum, the followers have been replaced by Cautes and Cautopates.

The sacred banquet is represented in the Sunday ceremony that gathers the initiates under sacrament.

Mithras' mythical and symbolic history concludes with the ascent to the heavens, along with the Sun. Both gods are represented in the solar chariot. Sometimes Mithras appears at the moment of mounting, assisted by the Sun itself. The Sun usually takes the reins and drives the vehicle with a whip in his hand.

The ascent is usually represented by showing the inclined whole. It is therefore an ascending journey over the Ocean, sometimes depicted as a naked character through which a snake ascends, in this case as an aquatic symbol.