Enter
Where the sun and moon do not reach,
There is marvelous scenery indeed!

A Mithraeum, also known as speleum, antrum or crypta, is a construction, of not excessively large size, suitable for the Mithraic cult. Often, the temples are located in a room of a private house or in its basement. Even if they are ideally in the underground, many of them are external, trying to reproduce the appearance of a cave. If we review the Mithras myth we will easily recognise the leading role played by this place in different episodes of its life: Mithras was born in a cave, he captured the Bull and transported it to another cave, and in that same space the sacrifice or Tauroctony takes place.

Before entering the sanctuary itself, there is a pronaos that prevents the direct view of the Mithraeum from the outside. It also serves other functions as a place where initiates may dress for worship, sacristy (apparatorium), or even where food is prepared for consumption during the ritual banquet, as is the case with the Mithraeum of Martigny. The sacred part, with a rectangular floor plan, is divided into a central corridor along which there are two side benches, podia, where the initiates lie, face to face, in the Roman style. At the back, on a small podium, the central image of the Tauroctony presides over the room. 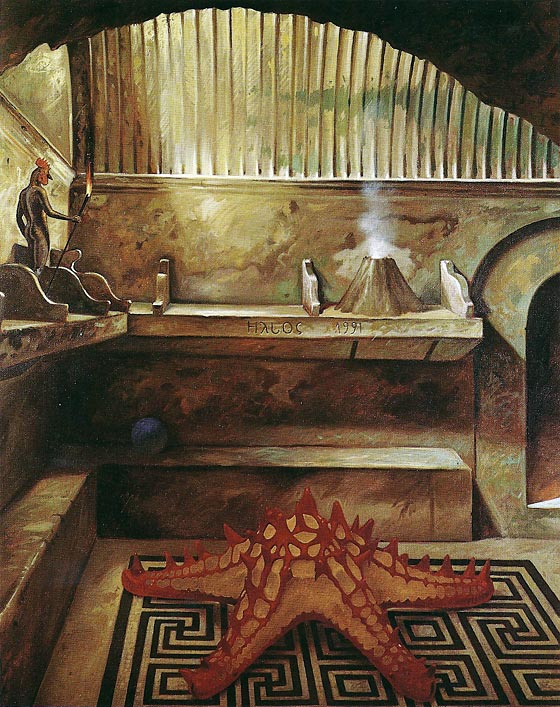 On a symbolic level, Mithras presides the central corridor. Cautes, the dadophor that raises a torch, presides over the left side, considered the favourable, and Cautopates, with the torch down, the right side linked to the darkness. The barrel vault and the decorative zodiacal or astrological motifs reinforce the identification of the site with a symbolic image of the cosmos. The mithraea are usually found near a fountain or stream, as water plays a prominent role in rituals.