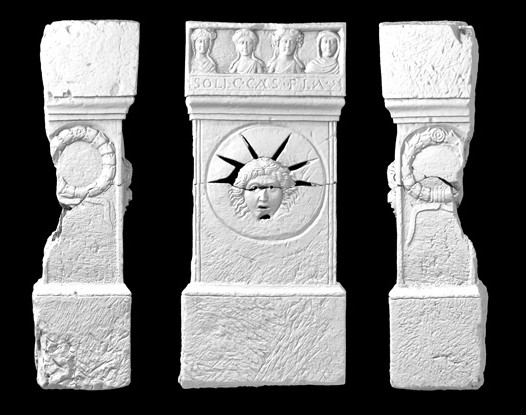 The Sol altar is a dramatic one, with a recess in the rear for a light which would have shone through his pierced rays, eyes, mouth and nose. Remains of an iron rod behind the nose hint at a more complex arrangement to create special visual or acoustic effects. The upper side of the monument features the busts of four ladies representing the four seasons.

Paint and plaster traces were recorded on both altars.

The dedicator, G(aius) Cas(sius) Fla(...), a centurion, may have been in command of the garrison or of a legionary detachment.

The Mithraeum of Inveresk, south of Musselburgh, East Lothian, is the first found in Scotland, and the earliest securely dated example from Britain.

Altar of Inveresk with a griffin