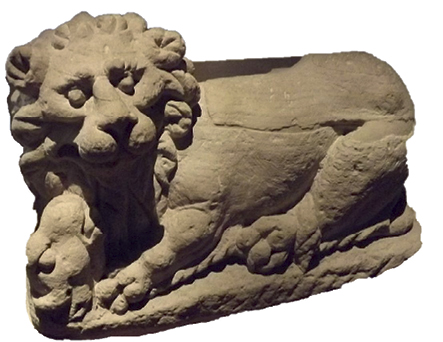 A reclining lion devours a bull's head held between its paws. The open mouth of the beast still bears traces of red paint.

The iconography of the lion with a bull's head is well known, specially because of some gems and a few coins. Those gems were amulets, on which the bull's head represented evil. In fact, according to Egyptian beliefs, the bull's head was a symbol of evil, possibly of Seth, and the lion was an image of the divine power which was supposed to control and conquer evil.

Mithraeum III found in the west part of Petronell near Hintausried in August 1894 by J. Dell and C. Tragau.

Of this great relief of Mithras slaying the bull only a few segments remain.

Mithras Petrogenitus, born from the rock, from the Mithraeum of Carnuntum III.

Inscription by Propinquos of Carnuntum

On this slab, Gaius Iulius Propinquos indicates that he made a wall of the Mithraeum at his own expense.

Altar of Carnuntum by the Jovians and Herculians

This monument bears an inscription and the representation of Cautes and Cautopates on the sides.